I feel like we are heading into the home straight now, At Home With The Furries is 73% funded with 132 backers and six days left to pledge. So don’t hesitate, please support the project. It’s an all or nothing campaign, that is if we don’t make the target, the book is a bust. All being well, that won’t be the case. So pledge, pledge, pledge..:-)))

Time Out featured the project and an interview with me on their website today, see link I recall my first encounter with the furries at RBW, which set me on the path to where I am today. 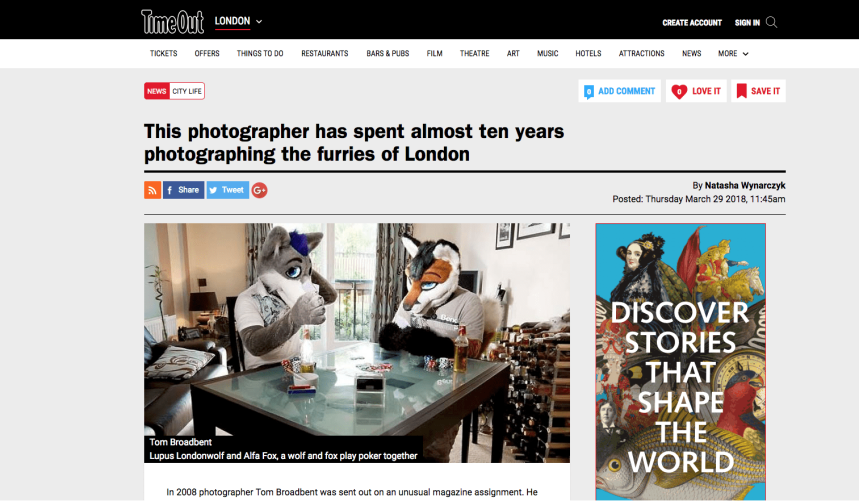 “It took Broadbent around a year of going to furry meetups in London – which can sometimes attract as many as 200 people – and building up trust with members of the community before he began photographing them in their houses. ‘Now, many of them have become my good friends – I’ve even worn a borrowed furry suit myself many times – and the response has been phenomenal, both from the furry community, many of whom have pledged money towards it and other people and media outlets.’

There are more than just London based furs in the book of course, most of the furries I’ve worked with in this project live outside the capital.

Dog Patch Press also featured the project on their website today, see link,  it has a short interview with me and some lovely words from the editor, Patch O’Furr who has been a supporter of the project over the years.

From Patch “Tom Broadbent has been staging creative fursuit photography for many years. I covered him in: Five pro photographers advancing the art of furry documentary. For each I named a signature approach, and to me, Tom excels at “whimsy”. His carefully chosen fantasy scenes show a depth of intrigue and storytelling beyond conventional scenes. Tom takes great care with relationships with his subjects. I think he’s the ideal photographer that furries could ask for.

That’s why I’m rushing out a post on short notice to urge support for his project. Tom has a dream to showcase furry subjects in a photo book, a beautiful archival object. It’s a few days from the Kickstarter deadline, and of course the funding is all or nothing.

We’ll know on April 4. I usually avoid covering crowdfunding – so this is an unusual request.”

I also talk about the importance of sticking to principles and not compromising in the quest to only have the work shown in the best places, it’s a good read. Thanks Patch

In exhibition news, one of the images has been shortlisted by the Royal Academy for their Summer Exhibition, which is very exciting. I’ll hear whether we made the cut in late May.

Here’s the Kickstarter link, all book supporters get their name or chosen name (i.e fursona) in the back of the book.  https://www.kickstarter.com/projects/466109304/at-home-with-the-furries?ref=bpoi2h

The campaign ends on Thursday 5th April at 7.42am

Tom Broadbent is a portrait photographer based in London

There was an error retrieving images from Instagram. An attempt will be remade in a few minutes.