Last Friday I went to a show of Coventry University’s latest photography graduates, it was called Raw Format and showcased a selection of the work from the final year students. It was being shown at The Strand Gallery in Charing Cross.

With a foreword to the exhibition by Jon Levy, these guys mean business. There seemed to be a really good understanding of what makes their work appealing to buyers and picture editors. You know that old chestnut of making a living out of photography.

I actually taught these students towards the end of their first year, but I didn’t recognise them. That is to say I hadn’t grasped just how much they’d progressed in the two years since I last met them.

Their tutor and my old friend, Jonathan Worth gave me the run-down on their work.

All the work was really strong and presented to a very high standard but speaking with my picture editor’s hat on, there were a few sets which really stood out for me.

Genea Bailey has documented beauty pageants in the UK with stills and sound. I really liked the concept and the presentation. The image below is formed of all of her images, clever!!

Daisy Ware-Jarrett went off to Japan and did a set of really interesting self-portraits, playing off ideas of identity and consumerism. The showcase of the work was really good, she even had a doll of herself printed in 3-D. (3-D printing rocks btw!!) 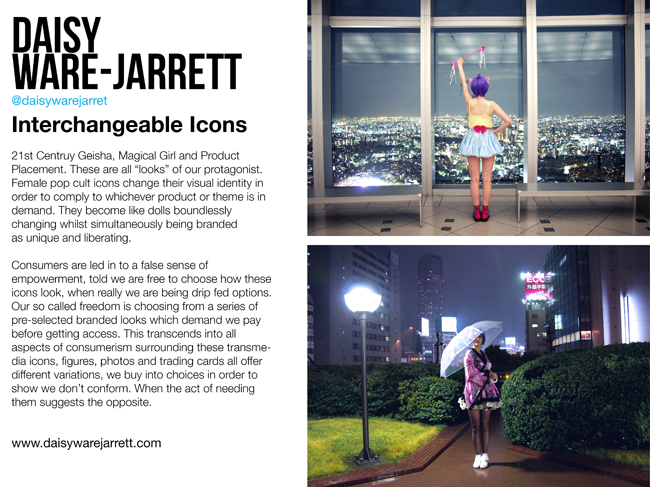 Last but not least, Jack Somerset shot a really fabulous series of Paralympic athletes in training for last year’s Olympics. I was really impressed with this set. And his presentation was second to none, it feels like it could be a book ( yes, it’s that good!)

Jack, make sure you get them into Taylor Wessing this year!!