I spotted today that Noel Fielding has got a a new book out; The Scribblings of a Madcap Shambleton so it’s a good time to relate the day I photographed him for Bizarre.

Noel apart from being an all round good guy, funny bloke, Mighty Boosh/Never Mind The Buzzcocks type and the rest is also an artist, a pretty good one too and in August last year he had an exhibition at Maison Bertaux of his artwork.

Maison is a coffee shop/gallery down in Soho, in Greek Street run by the fantastic Tania Wade, just off Shaftesbury Avenue. Noel has had an exhibition there before and since it’s just down the road from here. We popped down there to do a quick recce and of course have a delicious cake as well.
The exhibition, Bryan Ferry vs The Jelly Fox was split between the basement, The Church of Bryan Ferry and upstairs with his paintings and scribblings dotting the staircases and cafe space.

Noel is a natural performer in front of the camera ( having done a bit of research on IDS to see what other photographers had got out of him)  and I’d found a really good spot in the stairwell of the café, not exactly the easiest place to shoot as my back would be up against the wall and I’d have to pull out the ultra wide just to get him in the frame. As well as the fact that people would be constantly wanting to get by, being as it was next to the kitchen. So yes it wasn’t the easiest but it was the best.

On the day of the shoot, me and Dr Blackthorn ( my editor)  went down to the café. I set up the lights and we waited, half an hour later. Noel turned up with a suitcase. I know that he’d recently come back from the Edinburgh festival so I asked what have you literally had he come back this morning? “No mate, these are all my outfits for the shoot, I love Bizarre magazine” Well, as starts go to any kind of shoot, that’s pretty spectacular.

I did a few shots of him in the church of Bryan Ferry to get started and Noel was so sweet, I hardly had to direct him. 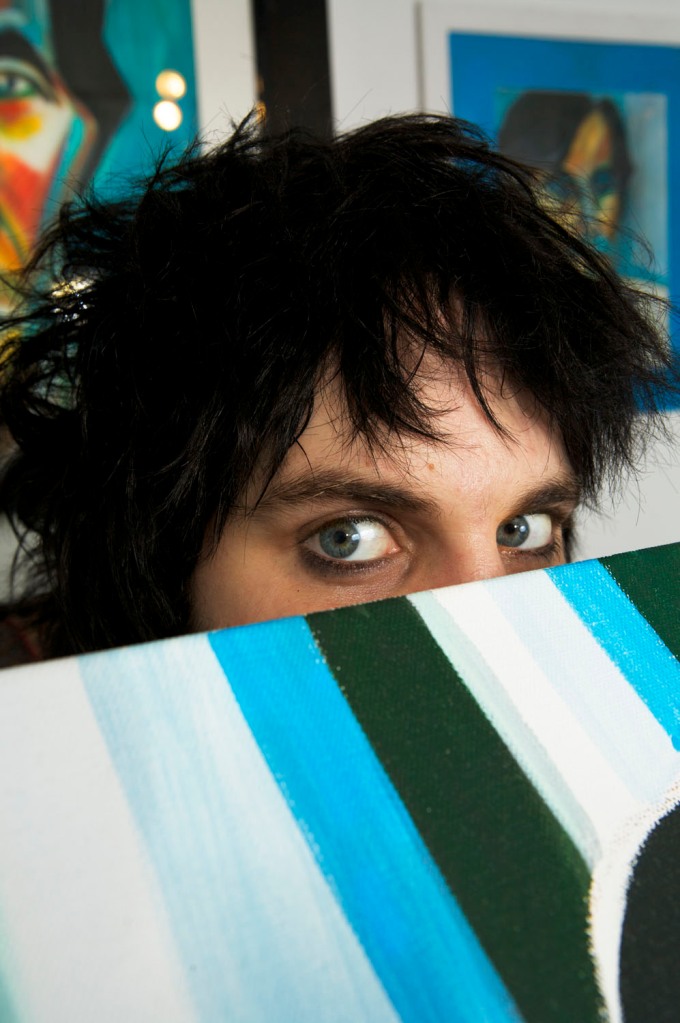 Eventually we came to a natural break and the good doctor sat him down to chew his ear off about his art, The Mighty Boosh and working nights to get the first series of the show out on time. Me and my assistant, the lovely Emma Thatcher disappeared upstairs to set up for the stairs picture. I set up a few lights and courtesy of the wonderful Tania who kept us refilled on endless tea and cakes as well as being a stand in model to check the lighting, we were ready to go.

When Noel appeared for the final denoucement I said before the end of this shoot I’ll have you falling down the stairs to get the killer shot, he scoffed at my suggestion, as in you’re crazy fella. There’s no way that’s going to be breaking down, not on my watch!! Well newsflash he did in the end and loved it. 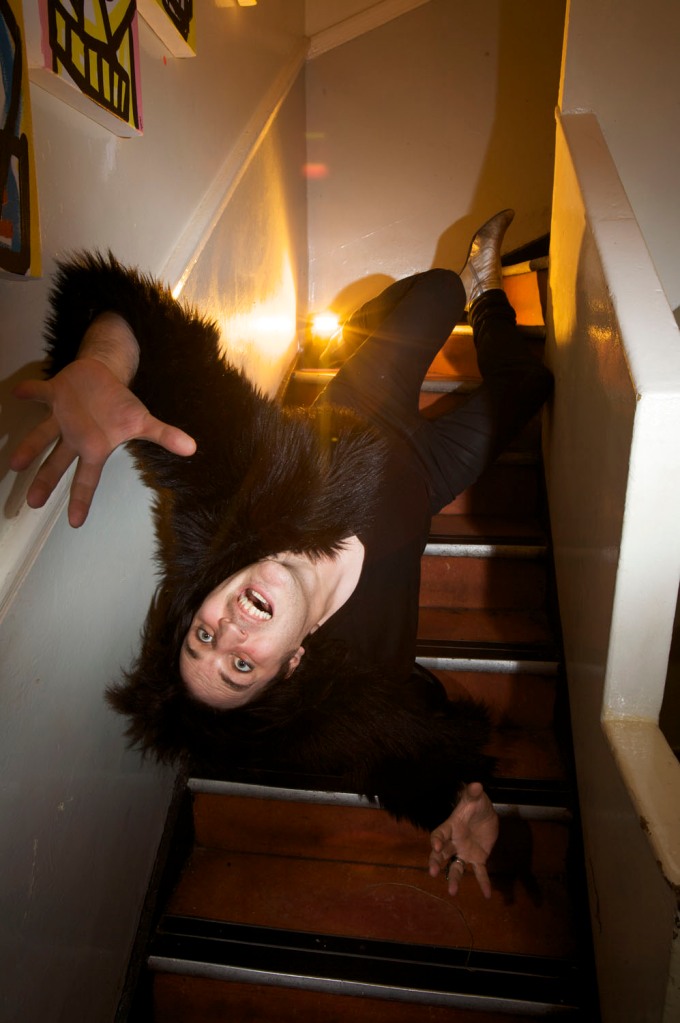 By this point, high on coffee ( switched from tea by this point) I’d turned slightly Bailey, insisting that the next shot would be the one, just a few more, that’s the juice mate, the money shot, all those classic lines, you absolute beaut. Get in, sweet stuff!! This was the last frame and once I got it, it was a wrap. 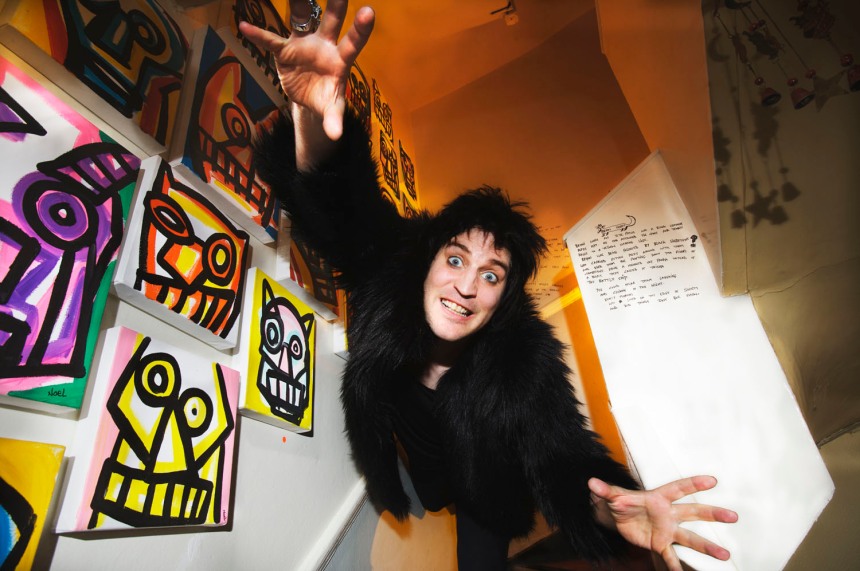 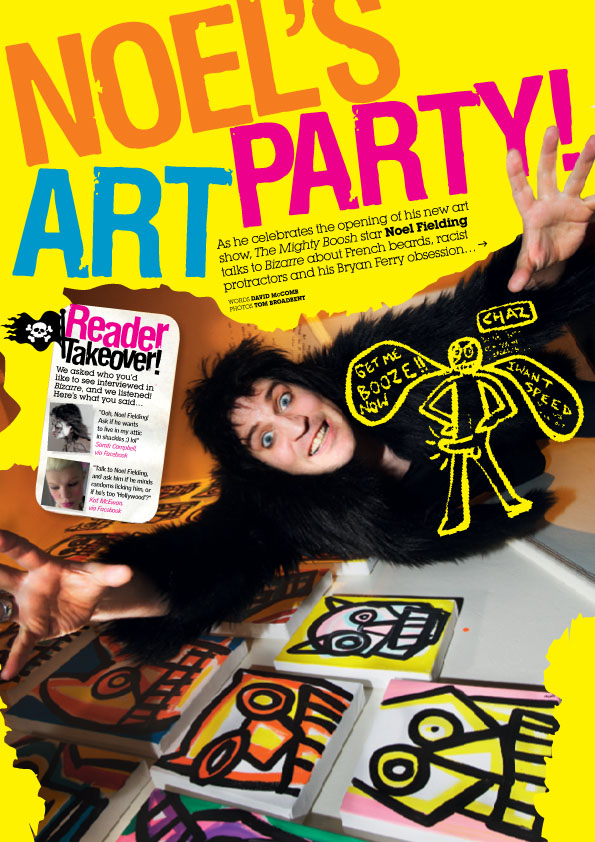 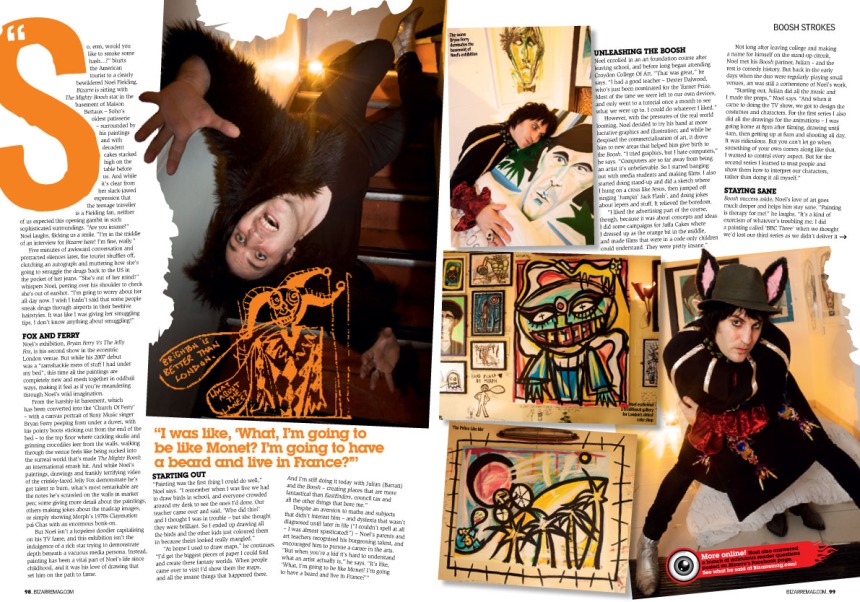 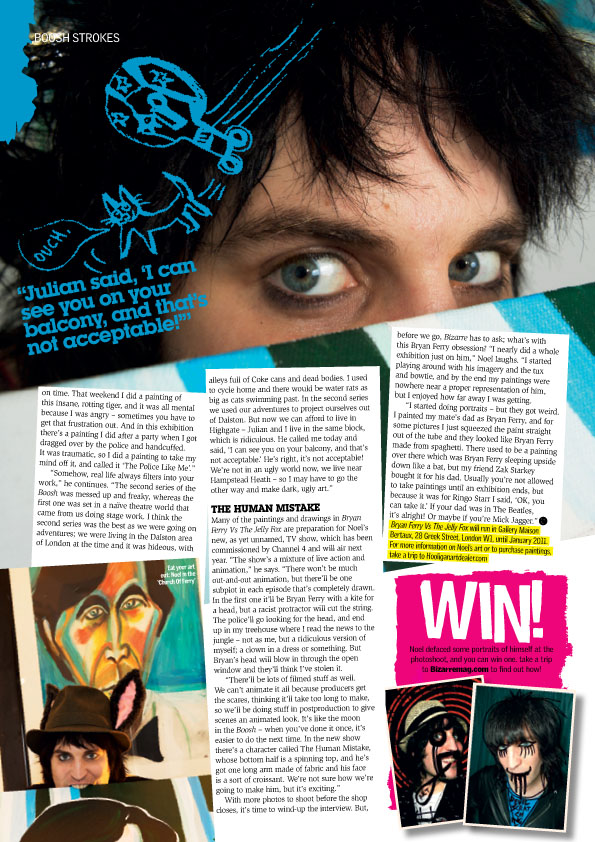 It was published in Issue 167- October 2010 of Bizarre magazine, you can read the interview here